Subhash Kapoor’s weakest movie, writing falters with too many sub-plots. 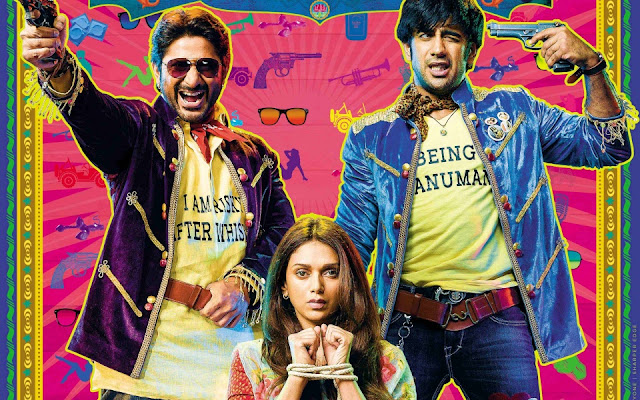 A movie on Khap Panchayat that also shows the tragic Manoj and Babli real life honor killing incident, and with last films like ‘Phas Gaye Re Obama’ and ‘Jolly LLB’, you expect another winner from Subhash Kapoor. Unfortunately, that doesn’t happen!

Two cousin brothers Guddu (Amit Sadh) and Rangeela (Arshad Warsi)  are orchestra singers as well as informants for the local gangs. Guddu wants to become a gangster but Rangeela doesn’t want a dangerous life. In one of the gang act they get caught and the inspector is willing to let them go free if they give him 10 lakhs. An opportunity comes to them,  their friend Ashfaq (Dibyendu Bhattacharya) offers them to kidnap a girl named Baby (Aditi Rao Hydari). But Guddu and Rangeela are un-aware of the motives Ashfaq and Baby have, and how Billu (Ronit Roy) is linked with all of them forms the main part of rest of the story.


Guddu Rangeela tries to do too many things, its a comedy between two characters Guddu-Rangeela ala Ishqiya style with Baby getting involved too later, also it tries to give a social message regarding the dreadful honor killings, and there is a revenge of dead wife/dead sister with culprit being Billu. The movie takes these 3 sub-plots altogether and ends up serving nothing at all.

Remember the terror we felt in NH10 when a brother killed his own sister and sister’s lover. But here, when the Manoj-Babli real life based honor killing scene comes, you feel nothing at all. Subhash actually trims that part a lot, showing a flashback of Rangeela falling in love, getting married, quick encounter with Billu, the escape and then a silly twist to it at the end of movie.

In one of best scenes of movie that is entry scene of Billu, he successfully convinces one of the villagers to kill her daughter who has fallen in love with a different caste guy. Sadly, such powerful scenes are hard to find in rest of the movie. There are two good references in movie, one to a Sholay iconic dialogue and the other on Subhash own movie 'Phas gaye re obama'.

Its the writing that lets Guddu Rangeela down which was the highlight of Subhash Kapoor’s last two movies.

Music is forgettable with only ‘Maata ka Email’ that pleases the ears, infact the song sets the mood up as it comes at opening credits. ‘Sooiyan’ is terribly placed song in narrative, that forcefully tries to build Guddu and Baby romantic angle.


Among the performances, Arshad Warsi gives a good performance but surprisingly the writing doesn’t offer him enough great moments, only one I can think of is when he tells I am hungry and will prefer eating first before dying.

Amit Sadh was my favorite in Kai Po Che, but here he never appeals at all.

Ronit Roy despite being brilliant as Khap Panchayat evil leader in that Haryanvi dialect, gives the deja-vu feel yet again of his performances in Boss, Udaan etc.

Aditi Rao Hydari is decent in her supporting role. Special mention to that inspector who has a very good antakshari sequence, I wish he had more screen-time.

After a impressive performance in D-Day, Sree Swara Dubey is wasted in this movie, including a unintentional funny scene where she out of no-where gives a speech on gang rape, female child death on birth etc.


Guddu Rangeela ends up as Subhash’s weakest movie. It doesn’t work as a comedy movie and isn’t able to give any social message in right way either.